It’s been another long wait, but we finally received the MRI results. It’s not the miracle we were hoping and praying for, but I’m still not giving up on it either. Monday night following the MRI something amazing happened that I’ve only heard or read about but never experienced myself.

For sometime now, Steph has had difficulty falling and staying asleep. Her doctor prescribed her a sleep aid to help her get a good night’s rest. She normally takes it about an hour before bed and it’s very apparent when it kicks in. Monday night wasn’t unlike any other night. She took her medicine, got in the bed and we talked and prayed. After our prayer, she said she felt cold and wanted an extra blanket. When she sat up to grab the blanket at the foot of the bed I heard her ask, “Who are all these people?”

Staring into our dark bedroom she began to describe beautiful lights and angelic beings surrounding our bed. “Don’t you see them? That one is really big.” She began to describe an angel that stood as tall as our 10 foot ceiling. “That one over there is praying. Why are they here?” “Because God sent them to watch over you”, I said. She laid back down and softly fell asleep.

Last night we were eating dinner and I told the kids what had happened the night before. Steph had full remembrance of everything. After dinner I went outside to check the mail. In the midst of a bunch of junk mail was a card from a member of our church addressed to Steph. When she opened it, this is what was inside: 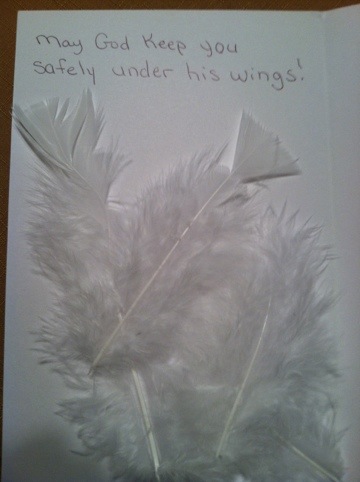 Some will debate it was a merely a dream induced by her sleep medication. But she has never had a hallucination before, and I don’t believe she had one that night. I believe that God allowed my wife to see what very few eyes have seen and used a member of our church to bring confirmation that it was real.

There’s much more to Steph’s angelic encounter that I didn’t post here. Perhaps she will share it with you sometime, but I will say, it’s truly amazing.